Atlantic City casinos are gearing up for the pre-summer season at the Jersey Shore.

Many consider Memorial Day weekend the “unofficial start” to summer.

Being that the PlayNJ staff does not hold degrees in meteorology, we have no idea what the weather will be like.

However, what we do know is there are a lot of exciting new amenities on tap for the summer of 2022. This includes brand new hotel rooms ready for guests at several properties around town.

Plus, judging by April’s revenue report from the New Jersey Division of Gaming Enforcement, most Atlantic City casino floors have exceeded pre-pandemic levels.

This could be a sign of even better times ahead.

Of course, the current inflation combined with the rising gas prices are the wild cards. Whether or not the combination causes players to cut back on their gambling excursions is to be determined.

After all, NJ online casino players can enjoy apps from the comforts of home.

However, even after considering all the factors,  we are extremely confident the summer of 2022 will be the strongest and most successful Atlantic City has seen in years.

Well, check out the Atlantic City Boardwalk Talk rundown for the latest news and rumors in May that have us excited about summer in AC.

The Yard opening in two phases

Think beer hall centered around the theme of Beers, Eats & Beats. What we do know is the indoor portion is having its grand opening next week, just in time for Memorial Day weekend crowds (The soft opening is Friday, May 20 at 4 p.m.).

The indoor portion of The Yard @BallysAC is having a soft opening today at 4 pm. Here is a look at the menu. pic.twitter.com/VYD13aX5DK

And the outdoor section, which will finally take full advantage of the 5,000-square foot courtyard space, should be ready by the Fourth of July.

PlayNJ caught up with Paul Juliano, senior vice president of operations for Bally’s Corp., to talk more about The Yard and other new amenities opening at Bally’s Atlantic City. 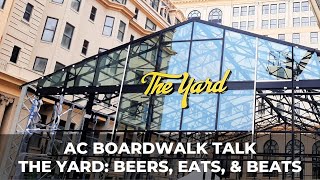 It’s no secret new restaurants are or will be opening at just about every Atlantic City casino this year. And this includes the Tropicana Atlantic City where there are eight new dining/entertainment concepts coming.

However, the openings will be scattered throughout the year.

But for those craving some BBQ, we’re happy to report Wild Honey Smokehouse and Tavern is open at The Quarter. It’s located footsteps away from the Havana Tower check-in area and valet entrance inside The Quarter parking garage. Some of the highlights from the new menu include:

There will be live music as well.

Hours vary and reservations are available via Open Table.

Final countdown to The Deck at Golden Nugget opening day

And we’re excited to report that the day is Friday, May 20.

Call it a fun alternative to a day at the beach, it’s the one amenity missing from the three Marina District casinos.

For now, Golden Nugget guests will be able to enjoy The Deck Bayfront Bar & Restaurant on weekends. It opens at 4 p.m. on Friday and 11 a.m. Saturday and Sunday.

Who is ready for the annual beach ball drop?

That’s right, the annual Resorts Atlantic City Memorial Day weekend tradition is a little more than a week away.

Of course, we’re talking about the return of the Beach Ball Drop.  And this year’s event is scheduled for 5 p.m. on May 27.

For those who have never experienced it, 5,000 beach balls will be suspended over the Boardwalk and then be released when the clock strikes 5 p.m.

It’s the highlight of a very exciting day at Atlantic City’s oldest casino.

AC Mayor Marty Small Sr. will be swinging by at 1 p.m. for the “Opening of the Sea.”

Unfortunately, Resorts AC guests looking to check out the new pool area featuring a retractable roof will need to wait a little longer. The renovations should be completed by the Fourth of July.

There is still a dining vacancy at the Borgata Hotel Casino & Spa as parent company MGM Resorts has yet to announce what is replacing Bobby Flay Steak. The celebrity chef concept, which opened in 2006, has been closed since last September.

With Atlantic City’s summer season fast approaching, we don’t expect the space to remain vacant much longer. However, at least for now, there aren’t any rumblings regarding what’s coming.

As far as timing goes, a May opening is unrealistic, especially since there is no announcement about what’s coming.

Before the end of summer could be a possibility.

Once we find out, the details will be posted on PlayNJ.

And for those wondering if and when Flay is making an Atlantic City return, we do know Bobby’s Burgers is coming to Harrah’s Resort.

Raceway at the Lucky Snake shifts into sport mode

The Raceway at the Lucky Snake (located inside the Showboat Hotel) will have a grand opening this weekend. The 40,000-square-foot indoor electric go-kart track will feature an ‘escaping Las Vegas’ theme.

As an added bonus, riders will have the option of filming the ride experience. The Raceway will be open at 11 a.m. daily.

Showboat Hotel is bringing the circus back to Atlantic City

In other Showboat Hotel news, the circus is returning. Starting June 16, and running through Labor Day weekend, there will be family-friendly performances by day and an adult exposé by night.

Showboat shared some of the details via press release.

The Super American Circus will be geared toward guests of all ages. Some of the acts will include:

As far as what’s new for 2022, there is the Globe of Danger. And from what we hear, it will feature a motorcycle thrill team that will “mesmerize audiences.”

“We have a lot of new acts this year for the Atlantic City crowds including an incredibly thrilling motorcycle act that will keep you on the edge of your seats,” says producer Tuffy Nicholas. “The performers will awe the audience with a variety of daredevil tricks in the Motorcycle Globe of Danger.”

There will be pre-show and intermission activities like face painting and photo-ops. For more information, including showtimes and tickets, visit superamericancircus.com.

For the adult crowd, Cirque Risqué is being billed as “a thrilling nighttime show for a more mature audience.”

These performances will feature aerialists, silks performers, contortionists and comedians from around the world. Shows will take place Thursday through Sunday nights.