This weekend, at 11 a.m. Saturday, live NJ sports betting will launch at the Meadowlands Racetrack.

The operation is being created in partnership with FanDuel Group, the daily fantasy sports provider. FanDuel has promised that online sports betting will follow in time for the start of the football season.

Sports betting at the Meadowlands Racetrack will take place in the former food court, now a custom-built, 5,300-square-foot facility with 10 tellers and 27 televisions for punters to track their bets.

The Saturday opening comes at a crazy time for global sports betting, as the following day is the final of the World Cup in Russia, and the Men’s Open Tennis Championship at Wimbledon.

Both events garner massive interest from casual sports bettors with commensurate revenues being made by sports betting operators.

Meadowlands is also running its $2.7 million Meadowlands Pace card race on Saturday. This itself is one of the racetrack’s signature events for the year. It is expected to attract a much larger crowd of racegoers than usual.

The combination of headline sports events and the big money horse race should provide sufficient interest to make the new FanDuel Sportsbook at the Meadowlands Racetrack launch a resounding success.

“Hopefully the sportsbook will be able to help the horse racing side as well, exposing a completely different demographic. People that bet sports coming here and being able to see horse racing, and hopefully we’ll see some crossover.”

New Jersey sports bettors will find a much wider range of bets on offer than they might have thought.

Bets will be available for MLB, NBA, NHL, Mixed Martial Arts, boxing, tennis, and golf as well as the soccer World Cup.

Betting options will include the opportunity to pick not just the winners of matches but also outcomes such as who wins the first half, second half, or who scores the first goal. 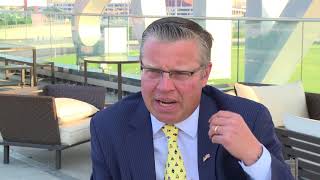 Meanwhile, the FanDuel Sportsbook will be open for business at the following hours (all times ET):

Meadowlands, MetLife Stadium, and the NFL

The Meadowlands location is right next door to MetLife Stadium, where the New York Giants and Jets play.

Jeff Gural, chairman and CEO of Meadowlands Racing and Entertainment, said that he’s hoping the coincidence of their location should encourage synergy between the two audiences:

“We’re hoping to be able to coordinate with [the Giants and Jets] so that their customers, if they get there early and want to make a bet, they could [come to the sportsbook] and then we could shuttle them to the stadium.”

The NFL has consistently opposed the introduction of sports betting, but now that it is a reality, the teams and leagues are likely to embrace the revenue opportunities available.

Matt King, CEO of the FanDuel Group, told ESPN that he expects the NFL to be “a big part of our business.”

He added that he also expects the online sports betting app to be up and running by the time football season starts.

New York’s failure is a win for Meadowlands

Not only is Meadowlands next door to MetLife Stadium, it’s also only eight miles from central Manhattan.

When the New York politicians failed to pass a sports betting bill by the end of their session June 20, Gural was gleeful.

“New York did me such a favor by not passing sports betting. That leaves me the entirety of New York City, Long Island, Westchester County. There are 15 million people that live within 20 miles of the Meadowlands. They gave me a tremendous gift.”