[toc]After engaging in a multi-year court battle to reclaim £7.7 million (roughly $10.1 million) in winnings, Phil Ivey is officially out of appeals in his legal fight against Crockford’s Casino.

This week the UK Supreme Court came down on the side of the casino, confirming previous court decisions.

In a unanimous 5-0 decision the court ruled that Ivey indeed broke the casino’s rules. He did so by identifying minute differences on card backs, a tactic known as edge-sorting.

As such, the court found Ivey and his accomplice fundamentally changed the odds of the game.

“The five Supreme Court justices unanimously upheld the Court of Appeal’s decision on the case, with Lord Hughes saying it was essential that punto banco remained a game of pure chance with neither the casino nor the player being able to beat the randomness of the cards that were dealt.”

Ivey and a female accomplice named Cheung Yin “Kelly” Sun took the casino for £7.7 million in a single session of Punto Banco Baccarat back in 2012. Right after the session, Crockford’s smelled some rats.

The casino returned Ivey’s initial £1 million stake money. However, it withheld Ivey’s winnings while it investigated the session.

Once the casino concluded Ivey and Sun used edge-sorting, they refused to pay his winnings.

As the case unfolded Ivey readily admitted to edge-sorting, believing the courts would find the practice legal. That appears to have been a gross miscalculation.

The 10-time World Series of Poker bracelet winner is also embroiled in a similar edge-sorting case against Borgata in New Jersey. Thus far, US courts have ruled the same way as the UK courts.

Ivey is still appealing the case.

Both before and after their Crockford’s excursion, Ivey and Sun had been playing high-stakes baccarat at Borgata in Atlantic City. And as they did in London, Ivey and Sun were using the edge-sorting tactic to get the upper hand on the casino.

The cases are not entirely the same.

In the New Jersey case it was Borgata that brought suit against Ivey, rather than Ivey suing the casino. Reason being, the casino unfathomably paid Ivey winnings amounting to $10 million over multiple baccarat sessions before they discovered Ivey’s advantage.

Even though there isn’t a precedent for UK rulings in US courts, the latest decision doesn’t bode well for Ivey’s ongoing appeal in the US.

Ivey maintained from the outset that edge-sorting is a legitimate technique used by advantage gamblers, and therefore not against the rules of the casino.

“At the time I played at Crockfords, I believed that edge-sorting was a legitimate Advantage Play technique and I believe that more passionately than ever today,” Ivey said in a statement through his attorneys.

Ivey went on to say that the courts’ rulings show a lack of understanding of gambling:

“It makes no sense that the UK Supreme Court has ruled against me, in my view, contrary to the facts and any possible logic involved in our industry.

“It is very frustrating that the UK judges have no experience or understanding of casinos and Advantage Play, or the ongoing battle between casinos and professional gamblers attempting to level the playing field.  If they had, I am very confident the result in this case would have been in my favour.”

But it’s Ivey that might be ignorant of the legal system, and gaming law in particular.

What the courts are saying

Not a single court has ever ruled in favor of an edge-sorter.

In addition to the Ivey cases, Ivey’s accomplice lost a 2015 edge-sorting case against Foxwoods Casino.

In each instance the court found that the tactic, and the ruse under which Ivey convinced the casinos to agree to his proclivities, changed the natural odds of the game.

UK Supreme Court Judge Anthony Hughes said Ivey took “positive steps to fix the deck,” and gain an advantage. Judge Hughes ruled that the integrity of Punto Banco baccarat is reliant on players not having advanced knowledge of the value of the randomly dealt cards.

In New Jersey the state’s Casino Control Act covers the shifting of a game’s odds.

“Ivey and Sun’s view of what constitutes a “marked” card is too narrow,” Judge Noel Hillman wrote in his NJ opinion. “By using cards they caused to be maneuvered in order to identify their value only to them, Ivey and Sun adjusted the odds of Baccarat in their favor. This is in complete contravention of the fundamental purpose of legalized gambling, as set forth by the CCA.”

Ivey and accomplice tilted the odds in their favor by making requests, which became increasingly more specific. If the casino doesn’t grant these requests, edge-sorting won’t work. See the video below. 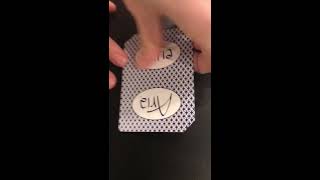 US Poker detailed precisely how the math of edge-sorting works.

These requests ranged from a dealer who speaks Mandarin, to rotating certain cards, to changing and not changing decks, all under the guise of being superstitious.

Sun, an edge-sorting specialist, used this gained information to the duo’s advantage, and ultimately changed the odds of the game.