The parity is the stakes-winning stature of the participants, making it hard to find an edge for any of them. The innovation is the major-stakes debut of fixed  odds wagering, with odds established at this draw.

Here is  the eight-horse field and particulars for this NJ horse betting event:

This race carries “win and you’re in” status for the Breeders Cup Classic in November. The  Haskell winner is guaranteed an all-expenses paid berth in the biggest race of the season on Nov. 5 at Keeneland in Lexington, Ky.

A closer look at the 55th Haskell Stakes field

This Haskell field has three major stakes winners in White Abarrio from the Florida Derby, Cyberknife out of the Arkansas Derby and Taiba from the Santa Anita Derby.

It has an impressive speed horse, Jack Christopher, who is 4-for-4  and trying a career-long 1 1-8 miles.

It has Mr. Haskell, Bob Baffert, the nine-time winner synonymous with glory days here. Baffert prevailed in 2020 with Authentic, the latest in a string of stars who leaped to post-season glory from the springboard of the Haskell Stakes.

Jack Christopher impressed observers with by winning the Pat Day Mile but created  mystique with a dominating 7-furlong romp in the Woody Stephens.

Coming into his own, he is the perceived speed horse, with the question surrounding who may run with him early. 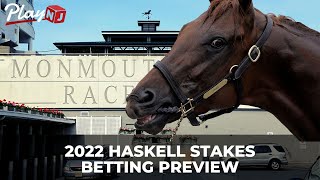 Baffert liking what he sees in Taiba

And Taiba arrives at Monmouth Park looking to earn a spot on the prestigious Haskell winner’s list.

Baffert sums it up best by saying “Taiba can be up there with the great ones we have been able to bring to Monmouth Park before.”

“He’s a big, strong heavy horse who won’t light it up in the mornings, but I was surprised what he did first out (to breeze). I let him dictate if he was ready or not. I wasn’t going to throw him into the deep end of the pool,” Baffert said.

“He has speed and he doesn’t get tired. The two turns won’t be a problem for him. The Kentucky Derby was a tall order for him. I don’t know what happened in the Derby. I wasn’t around. The Haskell is a great race and there are some really good horses in here. I hope the horse shows up.”

Taiba will be piloted by Hall of Fame jockey Mike Smith, a three-time Haskell winner. Most recently, Smith won the Haskell with Authentic.

Taiba has an ideal stalking position to set up a late run.

Why Cyberknife needs a strong pace

White Abarrio and Cybernife have similar running styles. So there is nothing they would love to see more than a horse like Howling Time put some early pressure on Jack Christopher.

Howling Time is the horse that waged a spirited battle with Cyberknife in the Matt Winn stakes and appeared to have won with a front-running effort. There was a fraction of a second when Cyberknife poked a nose in front and apparently that’s where the wire was.

“I think they robbed us,” Howling Time trainer Dale Romans said. “I think we absolutely hit the wire first. What I took out of it is that he’s improving and we expect him to run well again.”

However, Cyberknife trainer Brad Cox sees the need for a strong pace to keep his horse involved.

“For some reason he runs better at a target,” Cox said. “If he is running alone and clear, he seems to wander. Having a target brings out the best in him. If there is an honest pace, we will be a serious threat here.”

Benevengo is stabled at Monmouth Park. He has run at a lower level but does have a victory over the track.

The field also includes One Time Willard, who has never been better than third in three starts. And Saturday will be  a big test being that the horse has never gone beyond seven furlongs.

King of Hollywood, who finished seventh in the $150,000 Pegasus, rounds out the field. Now he is facing the nation’s top 3-year-olds for $1 million. So other than that, he has no problems.

Of course this year’s Haskell Stakes will be a historic one. And it doesn’t matter which horse wins the race.

The reason is this is the first Haskell Stakes where fixed odds will be available.

Dallas Baker, the head of international operations for BetMakers, which sets the fixed odds, said he believes the prices  between Taiba and Jack Christopher could fluctuate.

“Our initial model pointed to Jack Christopher being even money,” he told PlayNJ. “Right away there is great value on Taiba. I would not be surprised if that changes. Bob Baffert is talking up Taiba and if we see a lot of money there, Taiba could come down (maybe 2-1) and Jack Christopher could come up (maybe 3-2).”

So what this all means is if NJ bettors take Taiba at 5-2 now, that’s what they get. However, if his odds move on Friday, they can make a different bet at new odds while keeping the old bet.