When guests walk through Tropicana Atlantic City this summer, they will notice a lot more dining and entertainment options. Restaurant spaces that have been closed since the global pandemic hit will be reopening as completely new concepts.

In total, there will be eight new dining and entertainment offerings by fall 2022. Parent company Caesars Entertainment made the big announcement earlier today via press release. There is nothing wrong with freshening up a property, especially one that celebrated its 40th anniversary last year.

These new additions and enhancements are part of Caesars Entertainment’s commitment to invest $400 million into its Atlantic City resorts by 2023.

This post will be updated as new restaurants open.

When looking over the new dining and entertainment offerings opening at Tropicana Atlantic City, the variety stands out. We are talking BBQ, Japanese food, twisted farm food and a live music sing-along bar with dueling pianos.

“Building on Tropicana’s success over the last four decades, we are thrilled to go all-in on our investment in this incredible resort destination, our team members, and the community we serve, as we introduce an unparalleled eight new dining offerings and additional transformative gaming enhancements this year,” explains Jacqueline Grace, senior vice president and general manager for Tropicana Atlantic City.

Here are more details regarding each of the new concepts opening at the Trop.

Taking over the space previously occupied by Jose Garces’ Okatshe, Ossu is a modern Japanese tavern experience with a remodeled entrance. According to the press release, the restaurant will offfer a modern twist on Japanese street food focusing on small plates, sushi and yakatori.

Additionally, Ossu will highlight over 50 Japanese whiskeys, along with selection specialty sakes and a Japanese themed craft cocktail program.

The hours (beginning July 29) are: One of many new additions to The Quarter, Wild Honey Smokehouse and Tavern is filling the spot previously occupied by RiRa. It will be a 5,000 square foot BBQ restaurant “celebrating and elevating classic American comfort foods.” The bar program  features a robust beer list, innovative large-format cocktails, and a selection of double-barrel smoked cocktails.

If the name sounds familiar, it might be because there is another location at the Moorestown Mall. Think twisted farm food and crafted cocktails with a “Midwest flair.” Hash Hash A Go Go is moving into a prime location right off the Atlantic City Boardwalk (previously occupied by the Fiesta Buffet and Seaside Cafe). Now open.

The hours, according to the Tropicana AC website, are 7 a.m.-2 p.m. daily.

Taking over the other half of the Seaside Cafe, Purple Zebra is a daiquiri bar. The space will have frontage to both The Marketplace at the Tropicana and Boardwalk. Now open.

Gin Rickey’s will be the live music sing-along bar with dueling pianos coming to The Quarter. The 4,000-square-foot space, previously home to the Farmer’s Almanac and near Starbucks, will be open seven days a week. There will be nightly live performances, showcasing dueling pianos Thursday – Sunday. Now open.

For those wondering if Caesars Entertainment is ever going to replace the massive space previously occupied by Providence nightclub,  Royce Social Hall will be filling the void with a completely different concept. It’s being billed as an “American beer hall meets an adult rec room.” Guests can look forward to large-format drinks, shareable food and games that range from ping pong to shuffleboard, cornhole and bowling abound in the 10,000-square-foot entertainment destination. Royce Social Hall will be open seven days a week and will come alive on nights and weekends. There will be regular 21+ evenings on the schedule. Opening this fall.

Tropicana AC regulars know all about Il Verdi.  For those unfamiliar, it’s ranked as one of the top overall restaurants in Atlantic City according to Open Table. The authentic Italian cuisine includes house-made pasta and other Italian delicacies. It has been around since opening day. Later this year, it will be taking over the prime space previously home to Jose Garces’ Olon. There will be a new, beautiful beachfront location and design transformation, “offering timeless, modern design and stunning views” of the Atlantic Ocean. According to the press release, Il Verdi’s new venue and unique atmosphere will draw inspiration from the coast of Italy and the Amalfi region. Opening this fall.

So with Il Verdi relocating, there will be a temporary vacancy. The keyword is temporary as Hawthorne & Cork, which is described as an “intimate and refined new signature bar and lounge experience” will fill the space. Guests can look forward to bespoke cocktails, fine wines, and spirits with personalized service. Opening this fall. 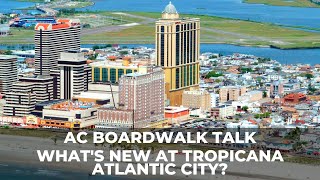 The Tropicana AC announcement is a small part of Caesars Entertainment’s $400-million plan for the Atlantic City market.

“We are excited to double-down on our commitment to the Atlantic City market by raising the bar this year, introducing new dining, entertainment, and gaming experiences to our guests at Tropicana Atlantic City,” said John Koster, Regional President for Caesars Entertainment’s Eastern Division. “These exciting new offerings and enhancements will join game-changing developments at Caesars Atlantic City and Harrah’s Resort and will further solidify our position as the leading destination for entertainment, world-class hospitality experiences and sports on the East Coast.”

The Tropicana AC press release also included details regarding a multitude of gaming enhancements. Once complete, it will “create one of the market’s first casinos of the future.”

There will be a brand-new Caesars Rewards experience center that will bring digital and in-person gaming together with tablets and a Caesars Sportsbook app center in a shared space. The experience center will feature self-service kiosks to check accounts and print cards, and a state-of-the-art video wall.

Additionally, there will be 240 new games, with over 200 new titles on the floor. The entire gaming floor will be revamped, including new carpeting, to enhance the overall guest experience.