New Jersey native Frank Vogel had a lightning-rod  connection to online sports gamblers and Garden State residents this week. He was fired, as expected, once the  the Los Angeles Lakers team he coached  finished 33-49.

But he wasn’t to blame.

Based on Twitter  comments, bettors know that the Lakers merely found a  scapegoat, axing Vogel  as coach once the aging, injury-riddled team the front office gave him failed to make the playoffs.

"Woj tweeted one minute after the game that Frank Vogel was fired. … The Lakers didn’t even have the decency to inform the coach that won them a championship 18 months ago, that they were going to let him go. … The Laker organization is in utter disarray.”

They also know that LeBron James, the de-facto coach of any Lakers team, was behind the change. The declining  James  may soon be on the clock, accountable for the team he in essence created, but that didn’t help Vogel now.

Vogel, who coached the Lakers to the NBA championship in 2020,  was, essentially fired from the Titanic.

That much is established.

But here’s what many people don’t know.

Vogel, who hails from Wildwood Crest, is a made-in-New Jersey success story. And he’s enjoyed a long journey.

Here are some Frank Vogel takeaways, that both gamblers and casual fans can appreciate.

Frank Vogel was on Letterman, as a kid.

It came long before any playoff game. The Jersey Shore native was 13 and suddenly live before millions of viewers on the popular program.

Vogel performed a Stupid Human Tricks segment, spinning a  basketball on one end of a toothbrush while brushing his teeth with the other.

As much of a novelty as it was, the appearance revealed  something about his ability to adapt. When he didn’t like how the ball was initially spinning on the toothbrush, Vogel  regrouped, started again and tilted the brush to accommodate the new angle of the ball. All on live television, with the ease of a guard calling a new offensive play.

The performance was, aesthetically speaking, a slam dunk.

The audience gave him a rousing ovation and Letterman said GE should use this idea to introduce a Gyro Brush.

It’s interesting to watch Vogel as a kid, barely saying a couple words to each Letterman question, but keeping his mind on his task. Contrast that with the polished, glib speaking demeanor he has now.

Current NBA players get a kick out of seeing the video.   It even resurfaced during a playoff game when Vogel coached the Indiana Pacers. 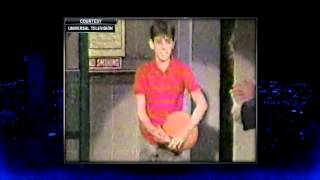 Vogel says  he learned the skills from a basketball camp and that his  mother bragged to colleagues who had homes in New York City. One thing led to another, the show was contacted and Vogel was in.

His home burned down when he was in high school.

On Dec.  10, 1990, at 5 a.m., Vogel and his mother Fran  awoke to black smoke filling the air from floor to ceiling. They screamed to each other, communicated they would each exit through a nearby window and managed to escape the blaze that would leave them homeless.

Everything they owned was gone.

But  neighbors, friends and strangers in Wildwood Crest and nearby Wildwood, North Wildwood and West Wildwood helped them recover. Frank went to practice the same afternoon as the fire, helping his team prepare for a holiday tournament.

They eventually won that tournament and he was the MVP.

Vogel later said that the situation propelled him to be kind to others in need. Vogel has spoken on this issue when he has come back to Wildwood to address young players.

He took the film-breakdown route into coaching.

Vogel had been a fine player at Wildwood High School. He was a backcourt playmaker and his number 22 is retired. Yet early  in his college tenure, he realized the dream of playing in the NBA was gone.

At Kentucky, he even had to lobby past a wall  of candidates just to become  a student manager for Rick Pitino’s Wildcats. Vogel got the nod and began the process of breaking down video, a skill that later helped enable him to teach the game.

He never considered being good enough to play for Pitino. But the film room became his route to the NBA.

It was an unusual route to the big show.  Vogel not only  forged administrative connections and found a spot in the NBA,  but won a league championship.

How many NBA coaches were once a student manager?

Although it was brief, Frank Vogel was at one time a member of the Philadelphia 76ers coaching staff. During the 2004-05 season. Jim O’Brien was their head coach. Vogel served as one of his assistants.Allen Iverson was on the team. The Sixers went 43-39 and made the playoffs.

Vogel  would follow O’Brien to the Indiana Pacers and become an assistant coach there. Vogel later became a head coach for the Pacers, Orlando Magic and the Lakers.

One of  Vogel’s most significant accomplishments, especially during his early years, was the ability to create powerful connections.

Some team will realize it wasn’t all Vogel’s fault and take a shot with Vogel, who is only two years removed from an NBA championship ring.

It’s obvious that the Lakers quit on him.

It’s also obvious that three major factors handicapped Vogel. That includes the decline in James, the crippling injury to Anthony Davis and the experiment to bring in playmaker Russell Westbrook.

Combined, the three players ate up more than $115 million in salary.

For those numbers, something drastic is usually done when the team falls short.

This time, Vogel took the hit.

But it will soon be someone else’s turn. Lakers management is stuck with a whopping $47 million contract on Westbrook for next season.

Unless  the Lakers can miraculously package him, other heads will roll.

Any new Lakers coach will walk  into enormous pressure.

There are rumors of current Sixers coach  Doc Rivers being courted for the now-vacant Lakers job. Rivers has roots in California and that type of move could make sense for him. If the Sixers don’t go deep in the playoffs, he may also be on the hot seat in Philadelphia. The Sixers got James Harden for him in an effort to win now.

That latest effort begins Saturday when the 76ers open a best-of-seven series against the Toronto Raptors.  Many NJ online sportsbooks had the Sixers as a 4-point favorite as of Wednesday morning.

Should Philadelphia once again come up short and the Sixers job opens up, speculation on Vogel could materialize.

He certainly fits in this area. Vogel grew up on the beach, was an avid  Philadelphia  sports fans and made numerous treks to the Philadelphia stadiums. The 1980 World Series champion Phillies are one of his all-time favorite teams, in any sport.

Vogel already has been a Sixer coach and O’Brien, one of his mentors, is still linked with the team.

If Rivers leaves or is let go after the season, this option will at least be considered.