What in the world is Whiskey Week, you wonder? (We hit our alliteration quota for the month).

A winter weekend without football at the Jersey Shore can only get better with a lowball glass and a candlelight dinner, right?

Brands such as Jack Daniel’s, Bulleit, Makers Mark and Basil Hayden are all taking part in the festivities.

“In the cold winter months, nothing warms up the palate like a sip of bourbon,” noted Michael Monty, assistant general manager of Bally’s Atlantic City. “(Whiskey Week) is something we’re really excited about, particularly this time of year when customers are looking for events to come to the casino and enjoy themselves.”

Well, things kick off with Meet the Maker sponsored by Makers Mark. It’s a VIP tasting event at Water Dog Atlantic City. Later in the evening is highball game night at the FanDuel Sportsbook lounge.

Close out the weekend on Sunday morning with whiskey brunch at Water Dog. 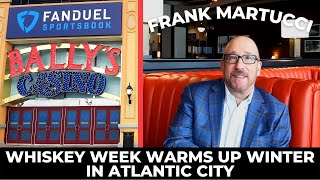 Welcome back to Bally’s AC

But Whiskey Week is more than just a promotion of the world’s greatest beverage (according to this author). After all, there’s no shortage of whiskey-themed events in Atlantic City casinos.

Bally’s Corporation is in the process of spending over $100 million at the Boardwalk casino hotel. Some improvements, such as the sportsbook and high-limit room, are already complete. Others, such as a new indoor/outdoor multi-story entertainment venue replacing Harry’s Oyster Bar, are in the works.

“We’re really excited about all these projects individually,” Monty said. “But, collectively, it’s about continuously improving the (property), and we welcome anyone who hasn’t seen the property in recent memory to come back and see us.”