BetMGM just launched a new advertising campaign that incorporates many of its star brand ambassadors. The “Its On” movement premiered this week on social media, and made its national TV debut during the NFL’s opening Thursday Night Football game.

The NJ sports betting  provider is of course available for use in the Garden State. BetMGM Sportsbook NJ went live in the summer of 2018 (as PlayMGM), while its online casino entered the market a year before that.

The commercial follows actor Jamie Foxx as he makes his way around the Bellagio Hotel & Casino, looking for help to fill out his betting slip. Foxx attempts to get some advice from his variety of athlete friends, showing the amazing cast of former players signed on with BetMGM.

It’s clear there is no shortage of star power when it comes to BetMGM’s brand ambassadors. It retains partnerships with several noteworthy sports players, along with some great actors.

In the ad, Foxx moves from celebrity to celebrity in order to find someone who can assist him in locking in a profitable wager.

After former NBA great Kevin Garnett turns him down during his spa day, Foxx called The Great One. Unfortunately, Wayne Gretzky also doesn’t have anything for the actor to go on, so Foxx continues his hunt.

He reaches another NBA legend in Jalen Rose, but soon realizes that Rose is working one of his TV spots. Without any help still, Foxx moves on once more to a dual Facetime call with some amazing running backs.

Although both Barry Sanders and Marshawn Lynch share their opinions, they become a little overwhelming for Foxx to handle. The actor hangs up his phones and approaches BetMGM’s newest brand icon in actress Vanessa Hudgens.

She offers just the right formula for Foxx’s betting conundrum, telling him to simply always go with your gut. Foxx agrees completely, as he confirms his three-leg parlay with BetMGM Sportsbook.

Here is the clip: 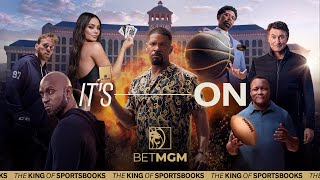 The ad was produced by the global creative company 72andSunny New York. Peter Berg, one of the executive producers for the HBO shows “Entourage” and “Ballers,” directed it.

BetMGM’s VP of Brand, Raymond Doyle, discussed the direction of the ad campaign, as well as how it ties into the operator. Doyle said:

“Entertainment is at the core of BetMGM and we want this campaign to keep viewers on the edge of their seats in a way that’s unexpected from the sports betting and gaming industry.”

The company continues to combine the entertainment and sports betting worlds together in additional ads soon to come. This initial spot sort of sets the scene of what’s next. BetMGM visits with a bunch of these ambassadors taking part in their new daily routines going forward.

‘It’s On’ Ties sports and entertainment together

Future marketing campaigns will continue to spin off of this latest ad from BetMGM. It uncovers more from Sanders, Rose, and Gretzky, as they intend to show how BetMGM’s platforms intertwine a social aspect through competitive friends.

Peter Hughes, the Creative Director for 72andSunny, talked about this dynamic a little more. Hughes said:

“We really wanted to show what makes sports betting so entertaining, and we looked to prestige ensemble TV for inspiration. ‘IT’S ON’ is about tapping into your competitive side and being part of sports betting culture. It’s something you can talk about with friends and engage with in a more meaningful way.”

These other follow up commercials will be released in the months ahead. Fans can also keep an eye out for their favorite athletes posting about the promotional pieces from their personal accounts.

BetMGM has plans to launch others during season openers, along with the start of the NCAA Tournament, and the NBA and NHL playoffs.