Here’s another Hollywood script for New Jersey football fans:  Kenny Pickett is now a NFL starting QB. The Ocean Township native is making his debut as an NFL starter for the Pittsburgh Steelers Sunday when they visit the Buffalo Bills.

And maybe, just maybe, Kenny Pickett will be behind center when the Steelers visit the Philadelphia Eagles Oct. 30.

It could be a road trip for Garden State residents or maybe just an extended drive.

So this isn’t just another Week 5 NJ sports betting story.

The Kenny P saga took root in New Jersey and blossomed in Pennsylvania.

Pickett’s New Jersey grew up less than 90 minutes from Lincoln Financial Field. That’s a short jaunt for his faithful compared to the journey of more than six hours they needed to see him play for the University of Pittsburgh Panthers.

It’s where he became a college star the past few years, and a future pro.

However, NJ fans saw him first.

At Ocean Township High school, he led the Spartans to a 9-2 record and into the Central Jersey Group III semifinal game. Pickett was ranked  the No. 23 overall high school football player in his senior year according to 247 Sports. He graduated in 2017.

Even in high school, Pickett showed attributes that would lead him to the NFL.

There is some Justin Herbert in him. Pickett is a strong pocket passer with a quick gun, reminiscent of the Los Angeles Chargers quarterback.

There is some Kyler Murray in him too. Pickett can run from trouble, when necessary, and pick up first downs, just like the Arizona Cardinals signal caller.

Some attributes are his own. Pickett makes fast decisions about where to go with the ball. This includes having the ability to throw deep or against his body if noticing an open receiver while he’s scrambling.

Pickett has a head for the game, flashing instinct one can’t teach.

In 2021, Pickett won the Johnny Unitas Golden Arm Award given annually in the United States to the nation’s top college football quarterback. Candidates are judged on accomplishments on the field as well as on their character, scholastic achievement, and leadership qualities.

Pickett is in excellent company.

The last two winners are Mac Jones and Joe Burrow, both of whom have reached a high NFL level. Burrow, in just his second season, led the Cincinnati Bengals into the Super Bowl. And his Bengals nearly obtained the Vince Lombardi trophy before falling just short to the Los Angeles Rams, 23-20.

Jones helped the Patriots reach the playoffs last year, as a rookie.

Pickett has already vaulted the 2017 winner, Mason Rudolph, on the Steelers depth chart.

Looking back at ‘Picks-burgh’ history

So when looking at Pickett’s body of work, you need to include the fact he broke records from the player considered Pitt’s greatest quarterback – NFL legend Dan Marino.

And in this year’s NFL Draft, Pickett enabled the Steelers not to blow a second once-in-a-lifetime opportunity.

The Steelers not drafting Marino in 1983 has long been a thorn in the side of their fans.

The University of Pitt and the professional stadium for the Steelers are less than five miles away. They are, for all intents and purposes, joined at the hip.

And they fumed when Pittsburgh then passed on Marino to take a defensive tackle Gabe  Rivera, who played only one season and was paralyzed from a car wreck. They fumed even more as Marino notched 61,361 passing yards, now seventh in NFL history.

On draft night, Pickett was sitting in New Jersey, enjoying a draft party in his honor at the Deal Lake Bar in Monmouth County.

As  he watched with family and friends, Pickett stayed on the board as selection No. 20 came. It belonged to the Steelers. The phone rang. It was Steelers coach Mike Tomlin, telling Pickett he’d be a Steeler. 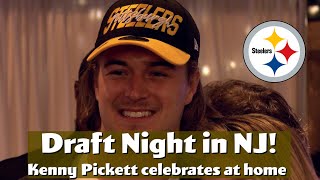 In New Jersey, the Pickett party was ecstatic.

And in Pittsburgh, it was long-overdue euphoria. Social media erupted. News stations carried the unbelievable news. Pickett was reunited with his Pittsburgh fans. He was coming back to  “Picks-burgh”.

From that moment, the “Kenny” chants went up for Pickett to be the Steelers starter.

The Pittsburgh fans wanted Kenny P in the lineup. And last week, their chants were answered. Pickett entered in the third quarter of Pittsburgh’s 24-20 setback to the New York Jets. His team trailed 10-6.

Here’s what he did in just a few possessions:

Yes, he also threw three interceptions, but the overall perspective was that he brought life to the Steelers. He put them in position to win, with a 10-point lead, until Zach Wilson’s magic propelled two game-winning drives for the Jets.

It will be interesting to see how Pickett matures.

“The normal strategy for a lot of teams and the way I have long looked at this is to figure that a quarterback plays behind a veteran for a couple of years and learns the ropes,”  Avello, said. “A year, two years, even three, that’s been the pattern for success.

“But that’s not the pattern anymore. Kids coming right out of college might jump in and start performing well.”

So Avello’s thinking is “Why couldn’t Kenny Pickett be one of those guys?”

“He has the same mentality as a Herbert, a Burrow, or any of these players who can take over the job right from jump street,” Avello said. “I like the energy he brought to the team. His success may be determined by how well he reads defenses.”

On a side note, Pickett’s odds to win the NFL Offensive Rookie of the Year are .

There will be a learning curve for Pickett. He’s going to suffer his picks. He plays for a team that’s 1-3 and fighting to save its season. The 2022 campaign may be difficult.

But throughout New Jersey and Pennsylvania football bases: It’s time for the Kenny Pickett show.